Collecting bottles for a few euros in Dortmund town centre

By Sebastian Sellhorst and Alexandra Gerhardt

The sight of people collecting bottles and cans is a common sight, and particularly in big cities in countries that operate a deposit return scheme for plastic and glass bottles and aluminium cans. Bottle collecting is an activity that involves a lot of work, is often stigmatised and yields low financial rewards. According to a recent study, almost one million people in Germany actively collect bottles and cans in public spaces. One of them gave us a guided tour.

Tom is waiting for me in Dortmund’s city centre. In one direction lies the pedestrian zone with its many shops and cafés; in the other, cars, buses and trucks are nosing their way along Wallring Street, which marks the location where the city wall used to be. In this text, we will refer to Tom only by his first name. He has been on the street for three years, and he makes his living collecting bottles and cans.

When did he start? Tom laughs. “Collecting bottles isn’t really something you do for the first time – something you start doing, like begging for money. You just return your deposit,” he says. “At some point, you also pick up a bottle you find lying around somewhere, since you’re already on your way. And eventually, you start looking out for them and picking up the bottles you find next to dustbins. But I don’t think anyone really decides, ‘I will be a deposit collector starting from Monday’”.

Tom talks while we walk. He occasionally casts a glance at the dustbins which have been affixed to streetlights. If you didn’t know that he was looking for bottles, you would hardly notice. He remains unsuccessful for the first dozen that we pass. “I used to have a flashlight and gloves, but they always break,” he says. “Most people dump put their bottles somewhere; it is cans that tend to end up in the rubbish. You normally don’t need to rummage through the rubbish for very long. It is only in spots where people shoot up that you have to be careful so that you don’t hurt yourself.” 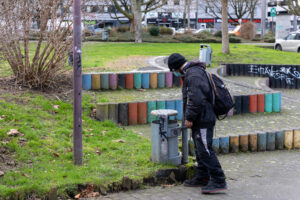 Tom’s first stroke of luck comes near a business college. While we walk, Tom pours the last few drops out of two cans – worth 50 cents when deposited – into his worn-out backpack. “This is up the spout again,” Tom explains, showing me the zip. “They don’t last for very long if you open and close them using the zip a thousand times a day. That’s why most people I know use large shopping bags, Ikea bags or foldable shopping trolleys.” But Tom’s not a fan: “Too much to carry,” he says while bagging a 0.5 litre Coke bottle. Those are worth 15 cents.

“Schools and the business college are good spots during lunch breaks,” Tom tells me. “They all chug energy drinks and just leave them lying around. That’s 25 cents per can. Cans are really the best. They don’t take up a lot of space and weigh nothing. Large bottles are also worth 25 cents, but they’re really big. And you can’t squash them either, because then the machine won’t accept them. There are also beer bottles for 8 cents, which you usually get in the evenings. But glass is really heavy to carry, especially if you’re only carrying a backpack.” 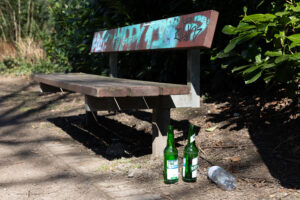 Patience is a necessity

Tom is not one of those people who waits in front of the stadium with shopping carts during home games, he tells me. He doesn’t need to make much money, either. “I can cook at my tent, so I need no more than two to three euros per day for food, and four to five euros for my beer,” he says.

“Funding those expenses through collecting items for the bottle deposit scheme is doable. But it has become harder,” Tom continues. “Three years ago, when I first started, it paid off more. But now, there are lots of people going through dustbins, even people like normal retirees. On my routes alone, I know of two such people who ride their bikes. Among the regulars, the maxim is first come, first served; we generally don’t get into any trouble. Around the stadium or the Westfalenhallen event space, when there’s still something going on there, now that’s a different story. People who go there have their hard and fast places, and they defend those, too.”

hrough begging, busking or collecting deposit bottles, only works while people are out and about. “When we were really in lockdown and the whole city was closed, that really sucked,” Tom remembers. “Especially during winter. Back then, everybody got drunk at home, bought their drinks in crates and also returned them. Though I still knew one or two places where I could always find something.

“It was alright during the summer,” Tom recalls. “At that point, there were some corners where someone was always sitting, like at the station or the church. In order to collect deposit bottles, you need to be patient. This isn’t suitable work for addicts who hope to make, like, 20 euros within an hour. For them, it doesn’t make sense to start by picking up eight cents’ worth.”

Tom heads towards the north of the city, which is also where he sleeps. Does he have a fixed schedule? Does he get to take the

evening off? “Well, I’m walking around all day anyway, like most of the boys who are on the street,” he says. “In the mornings, I head into the city, to Gast-Haus [an initiative based in Dortmund that provides accommodation, food and support for the homeless and those facing poverty] for breakfast, and I lunch at Kana [a Christian soup kitchen] with the Fransiscans. I need to move; I cannot stay in one place for too long.” He points to his shoes. “I have no idea how many thousands of kilometres I walk in a day,” he says. His shoes look fairly new, but the soles are coming off.

“I only got these a month ago,” Tom continues. “I made a point of buying work shoes, because I thought they would last longer. Turns out I was wrong! But just as important as good places around town and good shoes is having people who accept the stuff from you. Two kiosks have banned me from entering their premises. They immediately figured out that I’m on the streets, collecting deposit bottles. And they said that they’re not interested in that. The machines at supermarkets are alright. But they don’t accept every kind of deposit, and you also need to line up at the checkout. But the owner of one kiosk close to my sleeping spot is great. He takes everything I return and sells Hansa beer for 41 cents. Excluding deposit.” In Germany, about 980,000 people actively collect items for deposit return schemes in public spaces. That is the finding of a study conducted on behalf of the Hamburg initiative “Pfand gehört daneben” (“Every Bottle Helps”). The market research institute Appinio surveyed 400 people collecting plastic and glass bottles and cans in Germany last November.

The findings show that deposit collectors are young: more than half of them are under 25, and the majority are male – although there is also a high percentage (42 per cent) of female collectors. More than half (56 per cent) of all collectors make between 0 and 4 euros every day that they go looking for items to deposit. Collecting bottles and cans is the only source of income for almost one third (28%) of these individuals, which they make do with instead of or on top of receiving government support. A further quarter of them collect deposit scheme items in order to make ends meet, despite having a job. However, most people still do not make a lot of money: the majority (63 per cent) makes less than 50 euros per month, and just under a quarter make 50 to 99 euros.

With its “Every Bottle Helps” initiative, the Hamburg-based beverage company Fritz-Cola aims to reduce stigma against deposit collectors and to make sure that items suitable for the deposit return scheme are not simply discarded. “If you do not throw your deposit bottles into a dustbin but instead put them next to it, you show a little bit of solidarity with people who need deposits in order to make do in their daily lives,” the initiative states. Going through dustbins is not only degrading; it also puts people at a risk of harm. Almost half of all deposit collectors find it “disgusting” or “very disgusting” to look for items amongst the trash, and a third has been injured while doing so in the past.

As part of the study, 1,000 residents were asked about their image of bottle collectors in a representative survey. The results show that there is in fact a lot of empathy for those concerned (55 per cent): almost half of all people surveyed think that the government has an obligation to “do more to help those people” (46 per cent). Accordingly, 43 per cent put their bottles next to, instead of inside, dustbins. What is interesting is the gap between the actual income that deposit collectors make and other people’s expectations about what they can earn. Almost 80 per cent believe that collectors make at least 5 euros a day, when in fact most of those surveyed make much less than that.